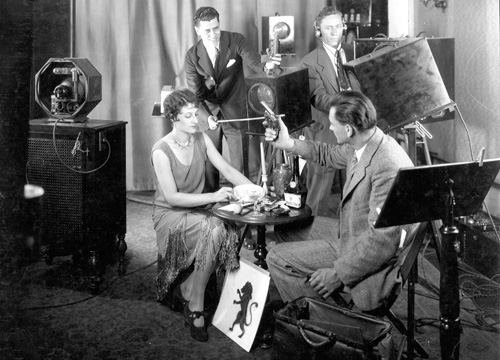 The world’s first televised drama, “The Queen’s Messenger”, is broadcast live from W2XAD in Schenectady, N.Y, with sound from WGY radio. GE Engineer, Ernst Alexanderson’s 48-line system of mechanical television is used. The GE Octagon (in the MZTV Museum collection) is used on the set of the play to monitor the broadcast. Given the constraints of his mechanical television apparatus, Alexanderson selects the 1899 play by J. Hartley Manners, which features only two characters and precious little movement. Three stationary cameras are used, one for each of the actors and a third to show the hands of a pair of doubles, which gesture with props such as glasses, cigarettes and, at the climactic moment, a revolver. The play is performed twice, first in the afternoon and then again at night, when it is hoped that the signal might travel farther.